Bikejoring or, How to Wear Out Your Dog as Fast as Possible

I recently had a near disaster that precipated an update to my setup.

DOG and I were trucking along having a lovely time when a deer ran out behind us. DOG immediately took off backwards causing me to run over the leash. The leash got wrapped up in the wheel, mangled my front fender, and caused me to tip over.

To prevent future repeats, I've added a wire loop (cannibalized from an old election yard sign) that keeps the leash up off the wheel. 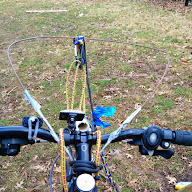 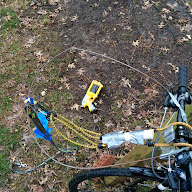 I'm also looking into getting rid of that short length of PVC pipe and just taping the bungee cords together directly. We'll see how that pans out.

We got our first dog a couple of months ago and he's amazing and handsome and I could ramble about him all day. But I won't. I'll save that for another post. 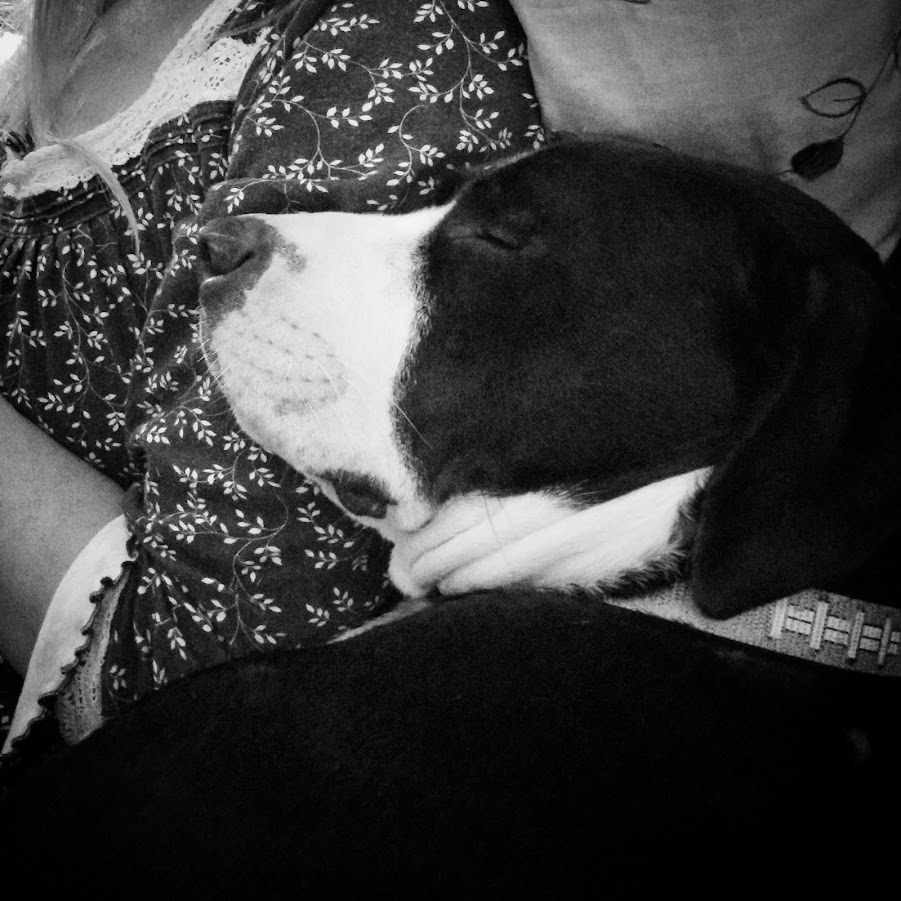 Bikejoring is a sport where you hook your dog up to your bike and they run as fast as they can while you try to keep up. There are lots of ways to do it, all kinds of crazy custom equipment you can buy, and even official races.

My first attempt was just looping the leash around the stem of the handlebars which worked ok for a little while. It jerked the dog around too much though and he almost pulled the bike over going sideways for a squirrel .

After that, I decided to see what I could cobble together from stuff laying around the house. To date, I haven't spent a dime on the current setup.

Again, this was all just stuff I had in the garage, although it did take a few tries to get the design to a point I was happy with. 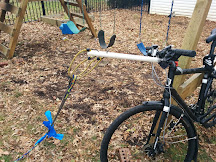 This version had a bungie cord wrapped around the bike stem. The hooks of the cord hooked into holes in PVC pipe. Unfortunately, it was hard to keep the pipe seated against the stem. It had a tendency to slip off to one side or the other and interfere with the cables on the bike.

I tried several different methods of attaching to the stem but none of them really worked, especially when the above dog took off sideways for a squirrel/rabbit/deer. I also had to unhook the bungie cords at the end each time I needed to hook or unhook the leash which is a giant pain.

In spite of all that, it still worked pretty nicely. (Video)

The final version (for now)

I realized that I didn't need the long pole. A much shorter thing worked just fine and was enough[4] to keep the leash and cords away from the front wheel and fork. When we're going full speed, the dog is out front so the leash is about 90% taut. When he's tired and we're going slower, he runs alongside and the leash hangs on the ground a bit to the side, but well away from the wheel.

After some trial and error, I settled on the design pictured below. 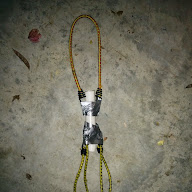 I drilled 4 holes to hook the bungie cords into and wrapped them with tape to keep them secure. 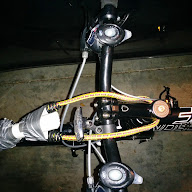 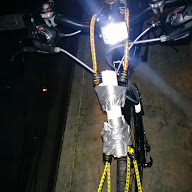 The whole attachment just draps over the bars. The stem of my bike sticks out enough that there aren't any issues with it slipping off.

The key bits are bungie cords on both ends so he doesn't jerk the bike too much and I don't jerk him too much. I also decided to wrap the bungie attachment points with tape to make the whole thing more solid. The carabiner is there to make it easy to get the leash on and off the attachment.

How is it biking with a 60lb dog running full-bore?

It's amazing. Junior loves it and his excitement is infectious.

It's not really hard either. I'm careful not to ride where there's a lot of traffic, although it's easy enough to keep him to one side when a car is passing us. The hardest thing was getting used to watching the road and the dog. You have to be prepared if he bolts to the side or if he decides to stop to pee. In practice, this is easier than it sounds. I got pretty good at reading his body language after just a couple of rides.

On the flip side, Junior's been wonderful about reading what I want to do in terms of speed and direction. I think a lot of is riding consistent routes so he knows which way we normally go. But we've also developed a pretty good system of commands. I didn't do any specific training to proof these. I just try to be as consistent as possible in what I say when we're riding.

[1]: Another amazing way to wear out a dog in a short amount of time.

[3]: Common obstacles are cars, joggers, or dog-walkers meaning we have to swing over to the shoulder or further out into the road.

[4]: Mostly enough. It sometimes bumps into the front wheel, although tangling doesn't seem to be a problem. I may still try to rig something across the bars to elevate it a bit.